The Court Theatre concludes its 2010-2011 season with an adaptation of operatic proportions with a newly-developed stage version of the Gershwin’s Porgy and Bess. This work is significant if only by virtue of the feat of acquiring the licensing agreements, but also grappling with its fraught history on the stage and in film. As a genre adaptation—a form gaining greater prestige as a unique kind of creative act—it required a lot of condensing and reshaping in terms of the libretto and orchestrations by Music Director Doug Peck in order to maintain the essence of the work for the small stage, ensuring that this production is no small experience. 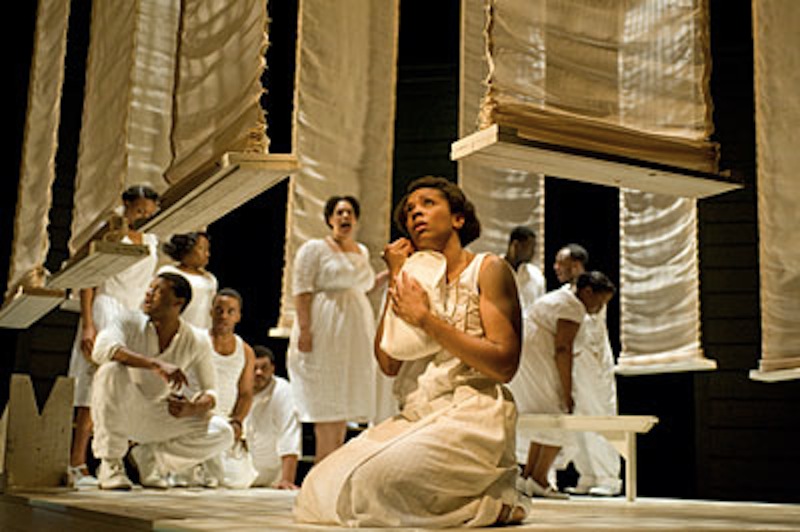 Because of the difficulty of actually seeing a production of Porgy, this musical primarily exists in the American imaginary via song. The versions of “Summertime” and “I Loves You Porgy” are incandescent, and yet their operatic voicing doesn’t overwhelm the intimate Hyde Park space. The best performance is Bethany Thomas’ “My Man’s Gone Now” as Serena: she seems to sing with the very tips of her fingers in this rendition, heart-wrenching in its desperation and emotional intensity. At times, however, the songs lean heavily on the emotional intensity of the arrangements as the libretto is pretty-much unintelligible. (This may be in part due to my own un-trained ear for operatic phrasing. If you are unfamiliar with the plot, I recommend reading the synopsis so that you can allow for the music to wash over you and not be concerned with actually attempting to make out sung dialogue.) The orchestra was downsized, like everything else in the production, to a trim half-dozen that still manages to present the illusion of the operatic wall of sound without the pressure.

The ensemble is arranged around the central platform that contains the performers, subtly re-emphasizing that the focus of the production is in its sounds. The set and staging also underscored the musicality by essentially whitewashing the material elements of the play. John Culbert’s minimalist set design, filled with sharp angles and semi-transparent partitions, is nicely set off by a large bell with pull-chord used by the players to interject at moments of tension. The award-winning Jacqueline Firkins deploys textured pure-white costumes, making the production seem sanitized.

I am torn by these design decisions: the white distances the action from reality and the naturalized qualities of the Gullah culture it evokes, but at the same time that culture is quite distant from the typical contemporary Chicagoan’s reality. It depicts a time and place we hope has faded with the racism and classicism that helped shape it–whether or not that is true. The choreographed free movement around the small platform, brimming with a dozen actors or more at a time, plays up this paradox between the grit of a heart-breaking cultural reality and its distanced place in the American cultural ethos.

In the promotional materials and playbill for Porgy much is made of the fact that it is now widely considered the first American opera, one that speaks to the fraught relationship the country has had with diversity. That the Court lies in the center of a neighborhood where members of the highest and lowest income brackets of the black communities live in close proximity (Garfield Park and President Obama’s Chicago home are both within walking distance) is definitely part of the life of this play. And yet, despite all of this foregrounding, the racial tensions felt somewhat smoothed away by the productions’ homogeneity: with all of the white costumes and set pieces only one white actor is used to represent many characters from the original book collapsed together in a role so brief that by sneezing you might miss it.

This is not to mention that the play participates in the flattening of disability issues not often raised concerning this work. While Todd M. Kryger’s Porgy is clearly putting himself through the ringer to move around the space, no one else on stage really responds to his difficulty aside from absent-mindedly bringing him a crutch or cart. Porgy as a hardship for the community is thus made unclear, which unfortunately leads to understating the importance of his rising up to bring the community together after a difficult death. These presentational choices feel odd for a work so invested in cultural authenticity as a subject.

And while no successful production team—and certainly not one as experienced as Charles Newell and his staff—is easily persuaded to the publicity of controversy for its own sake, I am not altogether sure about what kind of statement this re-visioning of Porgy stands in relation to the legacy of Catfish Row. It just doesn’t seem concerned about where it stands in the current social justice milieu, and I suppose it does not have to. The rarity and quality of this production is not one to miss, this is certain. Bess (Alexis J. Rogers) is vivacious and pert; her dynamism with Crown (James Earl Jones II) is kinetic. The production on the whole is beautiful and otherworldly, sweeping you up and into the Gershwins’ rhythms made so palatable that there is no sense of any rules being broken—and hearts neither.

UPDATE 31 May 2011: This production was recently featured in Cultural Connections segment on WTTW’s Chicago Tonight. The segment includes a live performance by Bethany Thomas with Music Director Doug Peck on piano, and excerpt of which is included here.