In sixteenth-century England, to go to the theatre was in essence to attend a dress rehearsal for the monarch, Queen Elizabeth I. To see a play by Shakespeare was ostensibly getting to see a play that might in fact go before her—getting to share in the same political or identity question that the leaders of the land might also find engaging. All the most interesting then that William Shakespeare’s Macbeth was one of the first plays likely performed for the new monarch, King James I of England and VI of Scotland, in a new century. Likely composed in the last year of Elizabeth’s life, the play overtly grapples with questions of governance, gender, and the performance of these identities within the eager public sphere. It is just this confluence of performed and projected identities that the What You Will Shakespeare Company’s (WYW) production of Macbeth interrogates this weekend only at the University Place Christian Church. 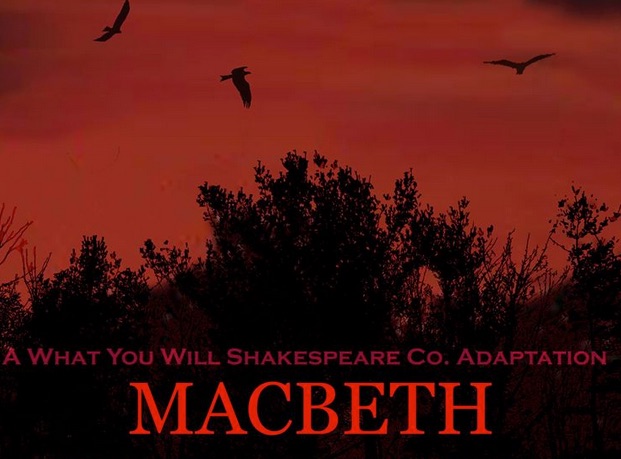 The basement of this building is huge, with a small proscenium stage on one end and a “discovery space” entranceway with three steps and railings on the other. Typically WYW productions here block their performances around this discovery space, using it as the primary entranceway and vanishing point for spectators. This is the first time I’ve seen them design the set with these two architectural elements set stage-left and -right of the main playing space, which was demarcated by two rows of chairs facing opposite one another and the action taking place in-between. It is a smart choice for a number of reasons: as a playgoer you watch the reactions of your fellow attendees directly across from you as much as the play action, you are made aware of one’s own performance as an audience member, and you are implicated in the projecting onto Macbeth the murderous action you want or at least expect him to take. ‘Cause who doesn’t know the Scottish play? But in this arrangement, we as playgoers as much as the characters within the fiction of the play are responsible for Macbeth’s descent. The arrangement thus elegantly posits the question: to what extent is Macbeth’s community implicated in the massacre of Scotland’s elite order?

And certainly there is something greatly amiss in Scotland beyond the Macbeths’ vaulting ambition. The opening scene of the play is of Macbeth (Tom Fornander) returning from a battle, having killed a supposed traitor we know not why. Several insertions of (what I believe are) Wiccan prayers to the Mother Goddess were included throughout, including just before this traditional opening scene. Here the witches (John Clishem, Kim Gasiciel, Celia Mueller) are every(wo)men, appealing to a mother goddess to “heal” them and their nation. This added rhetoric of healing positions the witches as representations of a kind of universal corrective power, a systemic resolving force emanating from nature’s constant move toward equilibrium. In this light the witches become sympathetic, desiring only an end to death, violence, and destruction that the elite Scottish regime seems to leave in its wake. Hecate is remade metaphorically into Mother Nature. The witches also double as the murderers, solving some of the play’s gaps. One of the witches (Celia Mueller) in her mannerisms routinely resists the dirty work they have to do, and the opening story about the drowned sailor is one of woe to which her companions try to cheer her. The mysterious third murderer of Banquo (Matthew Marquez) seems to appear out of nowhere in the text; I’ve seen some versions putting Macbeth or his wife in this role. Here, it is simply the resistant witch, finally peer-pressured into the killing, but at the murder of Macduff’s children, is horrified and filled the basement with shrieks. In being willing to see the witches as forces of order rather than chaos, the production solves seeming staging incongruities neatly.

The most significant intervention of the production, however, is the approach to gender in the casting choices. For a student troupe perhaps more than any other kind do you have to work with the bodies you’ve got. Thankfully, since all of Shakespeare’s players were men and expected to regularly play cross-gendered parts, girls playing boys never seems odd in these productions. What may have been bourne out of necessity the production decided to take seriously, seemingly because the play is overtly invested in whether or not “are you a man.” Certainly the witches and their added mother goddess rhetoric foregrounds this, but a number of other textual substitutions we made. I noted at least two in which Lady Macbeth refers to a dead or lost daughter, in one case an overt substitution for “father.”

Macduff (Tori Stukins) is also intentionally transgendered, enriching her character development at the end of act four. When she discovers her husband and children (children she has actually carried herself) have been murdered, Malcolm (Clayton Gentilcore) implores that Macduff hold her tears and “dispute it like a man.” MacDuff responded:

I shall do so;
But I must also feel it as a man…
Oh, I could play the woman with mine eyes
And braggart with my tongue! But, gentle heavens,
Cut short all intermission; front to front
Bring thou this fiend of Scotland and myself;
Within my sword’s length set him; if he ‘scape,
Heaven forgive him too!

To which all the sleepy, sociopathic, Alan Rickman-esque Malcolm can say to her is, “This tune goes manly.” It is a brilliant turn to make Macbeth’s murderer not of woman born but also a woman, no matter how uncomfortable it seems for her to carry his head and crown back to Malcolm in order to re-establish a male (rather than female) succession.

The production is incredibly consistent in these small details when it approaches how both gender identities are constructed and the ways in which Macbeth himself seems a green-screen, adopting whichever identity he is given that seems to stick best. The only snag in the show is the powerhouse herself, Lady Macbeth, played by Megan Scharlau. I hesitate to say it, but Scharlau may simply be too talented for her own good. As I have mentioned previously, she has a strong sense of timing in terms of entrances and dialogue that interiorizes her character. In her first major “unsex me” speech at the end of act one, she paces calmly yet with intention as she puts on makeup, reinforcing her performed gender identity rather than unravelling in. That “come thick night” is timed to her application of a brown pencil to her eyebrows is rather brilliant; whether Scharlau or director Orion Lovell’s idea, the simple choice to reinforce rather than undermine her gendered identity was powerful. What’s more, she isn’t overbearing: Scharlau knows how to hold still and listen as a character, and twice the fact that Macbeth gives her a blade rather than her taking it from him carves out space for her character to be sympathetic. Best was her continued presence in the playing space between her sleep-walking scene and her death. She is everpresent over the intervening action, crumbling psychologically as Macbeth’s political aspirations do the same. Her understated distress accrued empathy with her extended time on the stage rather than through the shock-and-awe of spectacular madness.

This is not to say that there weren’t a few hiccups, but these were mostly on account of the lights being unreliable. Truth be told, the cast didn’t miss a beat the numerous times the lights dropped unintentionally—the intentional blackouts were well-chosen when they worked. But then again, it is the Scottish play, the cursed play whose action after the first scene takes place almost entirely at night anyway. That, and the tornadoes touching down across southern Illinois just at the time the dress rehearsal started made it a rather perfect night be on Macbeth’s long, darkened heath. Part of me hopes that when you go either tonight or tomorrow night—because dear reader, you should most definitely see this Macbeth—that it storms for you, too.