ShakespeaRetold (2005) is really a miniseries in four parts, each an attempt to bring the bard up-to-date. Produced by the BBC Drama department and Northern Ireland division, for the most part these modernized vignettes remain honest to the core concepts and themes of Shakespeare’s plays with the use of quick and dramatically specific environments casting each conceit into high relief. The resulting package is inconsistent, however: half of the productions are cleverly created, well cast and executed. The other two struggle under the weight of ill-deployed modernization and ill-suited talents. I provide here mini-reviews of each to help you determine which to see or skip.

Episode 1: Much Ado About Nothing

Pity sex, unexpected love, and the weather: these are the key elements to David Nicholls adaptation of Shakespeare’s quasi-dark comedy. Beatrice (Sarah Parish) hates her news co-anchor, Benedick (Damian Lewis). The weather girl and sports guy, Hero (Billie Piper) and Claude (Tom Ellis), are madly in love, but graphics-man Don (Derek Riddell) loves Hero, and will destroy her life to show that he loves her. While Piper is the most famous for her role in Dr. Who, it is really Parish and Lewis who steal the show. Their moments of venomous banter, self-revelatory monologing, and convincing romantic chemistry provide the characters of Bea and Ben with a developmental arch rarely so convincingly achieved in such a short time frame. (For example, see this scene of romantic sonnet analysis.) Aside from the casting, the film is also successful addressing the core traits of key characters and illuminating central themes from the play. However, the final execution is a bit uneven, at times sacrificing character development for the concept. 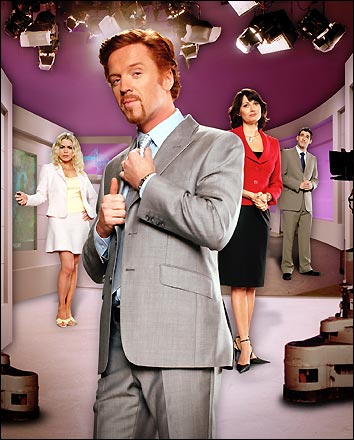 Freed up from the language, the film makes clever use of the news station sound stage and trick audio in order for particular characters to hear what others intend and don’t. Technology, such as the sound box, is used as a substitute for asides and other acts of spying, mostly to get Ben and Bea together. So much of the screen time is invested in their relationship that the Don-Claude-Hero triangle is somewhat left to the last minute. However, this emphasis revealed to me for the first time that both Ben and Bea fail as the best man and maid of honor because they are too involved with each other, and so are partly to blame for the collapse of Hero and Claude’s wedding.Hero, Bea and Ben all seem to grow and change as people in fundamental ways from the experience; Don and Claude, marked by possessive love, are stagnant and suffer unsettling and unresolved ends. In all, this first installment of the Shakespeare Retold miniseries is an enjoyable and successful, if uneven, reimagining of the problem-comedy wherein Bea and Ben, not unlike the Branagh version, steal the show.

Michelin-starred head chef Joe Macbeth (James McAvoy) and his wife Ella (Keeley Hawes) are distraught over restaurant-owner Duncan’s (Vincent Regan) inability to give credit where credit is due. The old man, fruitful in a cooking show and series of cookbooks, steals all of Joe’s ideas and the entire foodie empire is to be left to Duncan’s eldest son and inept cook, Malcolm (Toby Kebbell). Three bin men, contemplating the state of the world from their heaths of northern Irish trash, appear to Joe to predict his success until pigs fly. McAvoy, clearly the center and selling point of the episode, creates a mystical and intense character plagued by guilty conscience, but so ensconced in his moroseness yet provides little interiority and inevitably leading to problems of accessibility. 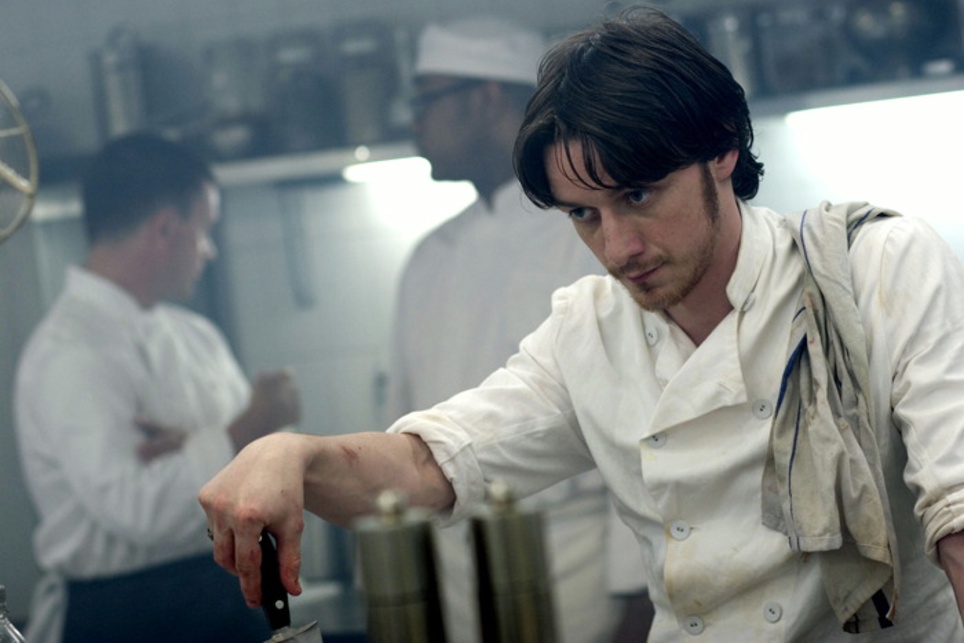 A strong Macbeth is one we can understand, one that causes us to say to ourselves, “if I were he, I would have done the same.” Ironically, Joe wears his heart of his sleeve; he begins dropping things and cutting himself when on edge, and can no longer sleep, cook, nor sing. Peter Moffat’s adaptation rides a few original elements very hard: constantly we see Macbeth drinking whole jugs of milk, often with vodka, as if trying to ingest back in his lost “milk of human kindness.” The film also literalizes Lady Macbeth’s famous “unmanning” that imply the couple lost a premature baby boy in order to motivate sentimental Joe to murder.

I have given suck, and know / How tender ’tis to love the babe that milks me. / I would, while it was smiling in my face, / Have plucked my nipple from his boneless gums / And dashed the brains out, had I so sworn as you / Have done to this. (I.vii.55-60)

However, these literalized elements to not compensate for the lack of arch, in plot or characters. The final scene, where helicopters land on the roof (JOE: “Pigs are landing on my head!”) and Peter, the French business manager, runs Joe through with cooking knives in the battle over the restaurant, lacks purpose because motivating forces are so obscured.

Episode 3: The Taming of the Shrew

Sally Wainwright crafted a tight and thoughtfully executed script, which could only have been done justice by the pitch-perfect although unconventional combination of Shirley Henderson and Rufus Sewell as equals-in-eccentricity, Katherine and Petruchio. Katherine is an up-and-coming MP with a model sister, Bianca (Jaime Murray), and real-life model mother (Twiggy). She needs to get married in order to entertain running for leader of the opposition party. Petruchio, friend of Bianca’s manager, comes to London in search for a wife in order to resolve £56,000 in debt.

Despite the short format, Henderson and Sewell are able to reveal so much interiority and vulnerability in their gruffly antagonistic characters. They lunch in a park together and Petruchio shows her hi family home, a an enormous Tudor that looks like the Zeffirelli film set, revealing that he is also a titled, but very broke, lord just “appallingly bad with money.” Both put all their cards on the table for the other to see. The cleverest modernization of the series is painting Petruchio a transvestite; he shows up drunk and dressed in drag for the wedding, wanting to be honest with Kate but also afraid of her rejection. Henderson’s ability to transform a gnome-like snarl to a cherubic inward smile reveals equal vulnerability when her own sexuality is called into question. She is manish where he is effeminate, and yet the trade in sensibilities, after some mudslinging in the Italian countryside, results in a sense of balance and calm.

Director David Richards does his best to address the problem moments of this play most subject to feminist rage—two scenes in particular that definitely toe the line. Honeymoon night Katherine is sour without her luggage, mobile, or transportation. Tired or her attitude, Petruchio’s plan to “tame the beast” in a near-rape scene that could have easily gone sour without the deftly convincing transition by both actors in tandem from fear to desire. Once her expression changes to longing, he immediately stops, refusing to have sex with her until she is nice to him. Also, the final scene of the film focuses on a fight between Bianca and her fiancé who is insulted by the serving of a pre-nuptial agreement. Bianca and their mother extol the logic of the pre-nup while levelheaded Katherine employs sentiments from act five of the original text:

Thy head, thy sovereign; one that cares for thee, / And for thy maintenance commits his body / To painful labour both by sea and land, / And craves no other tribute at thy hands / But love, fair looks and true obedience; / Too little payment for so great a debt…I am ashamed that women are so simple / To offer war where they should kneel for peace; / My mind hath been as big as one of yours, / My heart as great, my reason haply more, / To bandy word for word and frown for frown; / But now I see our lances are but straws, / Our strength as weak, our weakness past compare, / That seeming to be most which we indeed least are. / Then vail your stomachs, for it is no boot, / And place your hands below your husband’s foot: / In token of which duty, if he please, / My hand is ready; may it do him ease.

This is another moment that could have just left the audience puzzled, but Katherine qualifies her claims that because he does not expect her to be so slavish she can respect him. It is this mutual respect that renders the pre-nup moot for her, theoretically. If you only have time for one of these episodes, The Taming of the Shrew, with equal parts thoughtfulness and entertainment, is the strongest of the group.

This play has a dense production history, the most notable being Michael Hoffman’s 1999 adaptation featuring Kevin Kline, Calista Flockhart, Michelle Pfeiffer, Stanely Tucci and many notable others. Even without such big shoes to fill, this film falls terribly flat, seemingly more interested in the camp of “Shakespeare Industry” than the play itself. The conceit centers around the engagement party of Theo and Polly’s daughter, Hermia, at a semi-forest preserve semi-theme park called, well, DreamPark. Zander breaks into the park and interrupts the nuptials of James and Hermia, putting an equal damper on the park staff’s plans to put on a variety act for the party.

There is much bicycle riding, no mudslinging, and lot of drug and hallucinogenic banter by a stoner-type Puck (Dean Lennox Kelly), but the squabbling teens generally bore. Imelda Staunton provides the firepower for the production and gets the most interesting scene, blowing up at her husband for being unduly angry and inconsiderate: “We all feel angry, we all feel disappointed, but most of us just get on with it!” But the rage they sling at one another is inexplicable and doesn’t sit well against the very docile squabbles of their children. (I could not stand to address the marital problems of Oberon and Titania, as the acting was so unbelievably unbelievable.) It is the faeries primary concern, but why does Theo and Polly’s relationship matter so much? Despite the plot’s built-in magical elements, this film isn’t even fun to watch and is the least imaginative of the series.

In short, if you have to pick and choose in the series, make sure to SEE Much Ado About Nothing (EP1) and The Taming of the Shrew (EP3), but you could definitely SKIP Macbeth (EP2) and A Midsummer Night’s Dream (EP4).