Grossly under-publicized, Kenneth Branagh and Stephen Fry’s film adaptation of the Mozart opera, The Magic Flute, was released in US theatres this week. It was originally released in France and the UK back in 2006 at the same time Branagh’s As You Like It was hitting the American market. Considering that Branagh has moved away from Shakespeare productions in the last half-dozen years to take on projects like Valkyrie and the PBS hit Wallander, it makes sense to reintroduce him to the independent marketplace at this point to compete with the buzz of Joss Whedon’s Much Ado About Nothing.

In an unnamed country that looks suspiciously like France during WWI, a soldier named Tamino is sent by the Queen of the Night to rescue her daughter Pamina from the clutches of the supposedly evil Sarastro. But all is not as it seems. Under the musical direction of James Conlon, the film is formally operatic, with the dialogue and libretto by our Wilde-reincarnate, Stephen Fry. Avoiding the sound editing disaster that was Branagh’s Loves Labours Lost, as director he cast entirely outside his usual stable of actors for operatically trained voices rather than A-listers. With the full Mozart orchestrations and these rich voices, Branagh and Fry are able to use both plotting and music to facilitate dramatic argument—striking the balance that opera tends to loose when transcribed to the screen.

I find it interesting that after the relatively major aesthetic and financial successes that were Branagh’s Henry V and Hamlet, he has turned to ebullient love in Much Ado About Nothing, Loves Labours Lost, As You Like It, and now The Magic Flute. Where in the former teleplays Shakespeare’s verse is meant to convey the amorous emotional intensities, Flute reinforces the scale of emotion not only in linguistic conveyances–singing, I mean–but also through expansive camera work imitating the stage scale of contemporary opera and their production values. (Aida is traditionally staged, rather famously, with several elephants in its opening sequence.) In the film, the church were Sarastro is tending the innocently wounded seems larger than Westminster Abbey, with great halls and winding turrets that only turn corners and see no end. The pastoral trenches (conspicuously clean and green as compared to the muddy realism that brought critical acclaim to Henry V) also snake unendingly from both bird’s eye view and worm’s eye view cinematography choices. But it is the scale of the graveyard that seems the most expansive and most rhetorically pointed in its scale. After an aria of mourning by Sarastro, the dolly zooms outward to reveal unending whitewashed gravemarkers. Sarastro and his survivors shrink to nothing in comparison, but not before we notice that the memorials are inscribed with names in languages from across the globe, including Engllish, Sanskrit, and Japanese.

The frame narrative strategy has become an increasingly contentious directorial choice of late. Both Alan Cummings’ recent stage version of Macbeth and Baz Luhrman’s The Great Gatsby use insane asylums to spotlight a suspicious narrator. For a close listener, I feel that kind of suspicion need not be foregrounded by additions. This is not a claim for “literary purity” as it were, but rather my discomfort comes from what this presumes about audiences and the rhetorical properties of film. In the first, it assumes that after paying roughly $15 to see a film, the audience isn’t really paying attention or smart enough to notice inconsistencies. In the second case, it provides a limited (if perhaps only one available) reading of the film, and one that cuts its legs out from under the whole enterprise: if our narrator is (always) aberrant, crazy, not in touch with reality, what was the journey for? It privileges an individual, hyper-subjective experience rather than the relational dynamics early modern drama privileges in its dialogue. The popular asylum frame can be done effectively, as in the second season of American Horror Story, what I would call one of the smarter series on network television.

Flute is a bizarre enough piece—it is Mozart after all—that a frame narrative seems necessary not only for the distance in historical time since its composition in 1790s Vienna, but also for the operatic form. The screening I attended at our local Ar Theatre here in central Illinois pushed back its screen time by a half hour, so I chatted with some elderly fellow attendees also waiting outside. All were in there 60s at the least. One gentleman and his wife were excited for the screening as they regularly drive to Chicago for the Lyric Opera season. He was surprised that I was there: “Young people don’t go to opera,” he said, “opera audiences are dying.” Although I am not certain of what to make of the WWI pitch, which included the symbolic Christmas football match between the troops. Each side ends up being led by a mother (the Queen of the Night) and father (Sarastro) over their daughter, Pamina. The result is that as the parents are grafted upon the competing regions of Europe at war with one another, she becomes analogically symbolic them of peace through a unified European continent. Once she is free to marry her love, a soldier names Tamino who through the course of the film fights for both sides, the landscape is healed, recovered with growth echoing Disney’s version of Stravinsky’s “Firebird Suite” vignette in Fantasia 2000. As the UN struggles in the wake of financial collapses and political coups, the film does seem especially exigent for its initial UK and French audiences.

What seems to characterize the film is the overlap between a kind of tonal camp indicate of comedic voices of Branagh, Fry, and Mozart. Dry and ridiculous, they include a a bitter bite of topicality. The UN overtones of love and union promoting national rebirth makes it difficult to dismiss Papageno’s flying daydreams of bird women and giant lips. The black-and-write dream meeting of Tamino and Pamina nicely nods to the version of Flute that featured Fred Astaire, but jarred with the over-saturated lush battlefields of France. No other interior images used this palate, although their was much voice over as a means of psychologizing the lover’s drama. Its the deliberate exaggeration of interiority that brought so much criticism to Branagh’s Hamlet, investing again in the individual experience while opera exaggerates embodied emotions. A clever project, it too late in the game completely commits to its Technicolor theatricality and exaggerated qualities. I’m glad to see Branagh increasingly committing more consistently to the whimsy, and I hope rather than continuing in the vein of grit like Wallander, he takes up surrealist filmmaking as a next endeavour. 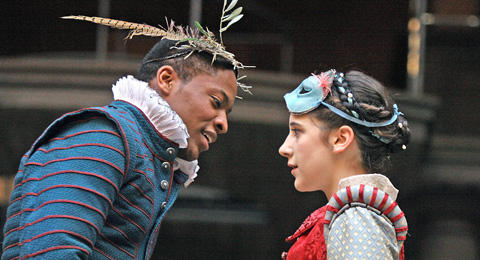