No matter where; of comfort no man speak:
Let’s talk of graves, of worms, and epitaphs;
Make dust our paper and with rainy eyes
Write sorrow on the bosom of the earth. 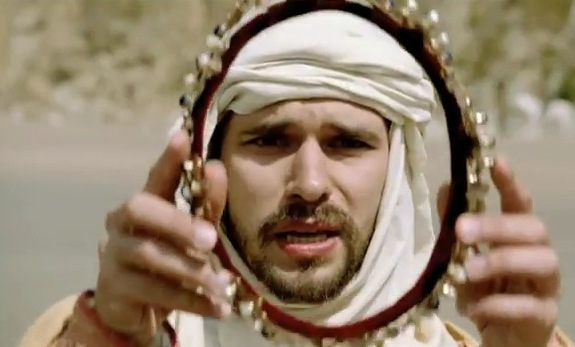 Richard, in another’s hands, might be construed as pitiable and soft, born without the backbone to rule. But in Ben Whishaw’s grasp, his entitlement and indecision produce a slimy politician merely “landlord of England…not king.” He disregards the citizenry, hiking up taxes to fund troops to quash civil brawls. When this income runs out, he seizes the estate of his uncle, John of Gaunt (Sir Patrick Stewart), at his deathbed. Constantly anxious about “baseness,” Richard is never able to take power. Unlike Henry Hereford, Gaunt’s son, he doesn’t understand that the only power he wields is that which his people choose to give up to him. His inability to command resolution or obedience from Hereford, aka Bolingbroke (Rory Kinnear), and Thomas Mowbray (James Purefoy) in the opening scenes speak to troubles to come.

Richard constantly undermines his own authority by virtue of his very anxiety over whether “we debase ourselves.” He reaches out to sycophantic favorites and flattering caterpillars, again and again asking for assessment by others while simultaneously dismissing them. (The PBS website offers a full synopsis of the production, including the eight beheadings of these favorites.) Richard does not know how to self-contatin, to self-assess. He waffles, equivocates, revises decisions at the last minute, and only panders to fairness when it serves his coffers. His peers begin to realize their king has “grown bankrupt” with this chilly callousness, operating without a clear moral compass and robbing the commons to freight conspicuous interests.

There are three excellent scenes in this BBC Two/PBS production that distill the weaknesses of Richard’s model of kingship: the exile of Mowbray and Bolingbroke, the usurpation of Richard, and the gardener episode. Two of them focus on the problem that he does not know how not to personate the monarch, how not to be the center of the room, and in the end, how to resign his monarchal status. He is constantly posing, striking the image of a godly monarch but unable to summon the supposed benefits of power therein. We first meet Richard on his throne, propped between orb and scepter, unable to produce resolution between his peers. Then, at the perverted joust, used to decide who will die rather than display martial skill, the king in all his gold and finery is more concerned with his pet monkey than the outcome.

In these scenes he plays the king of sumptuous: power through excess. But the display fails to convince. He then assumes a warlike mask instead. He first attempts this in his campaign against Irish and Welsh rebells. Upon return to beachy England he realizes all is lost regardless of his battle trappings. (England is not fetishized as a landscape of rolling hills meant only for thoroughbreds of Elizabeth I, nor entirely made of the fog and muck of the Brontés, but is a hemmed-in island of grassy and all-consuming sandy shorelines.) He doesn’t discard the get-up, however. Holed up in Flint Castle, he glares over Bolingbroke’s troops in a suit of mail entirely of gold and framed by gilt angel silhouettes. Sweating, trembling, he can barely stand the weight of his regalia for a few moments. All the worse, it is an unnecessary display: Bolingbroke has brought terms of reinstatement, not usurpation. Richard is made a fool in his excesses of wealth and war.

His final performance is that of a Christ unjustly crucified for the sake of power. To his usurpation he rides on a Palm Sunday white mule, himself barefoot and dressed in a thin shift of white (with gold trim, of course). In his long equivocating speech—unable to give up his title, unable to keep it—he whirls around the room adopting a posture of crucifixion several times. In part he blames, ironically, his “wavering commons,” his subject. It seems all to fitting then that a stable boy, having traded in several favors in order to merely “see” he who had once been king, leads to Richard’s death. Shot through with crossbow bolts by Gaunt’s nephew, his last pose mirrors an earlier moment of exchanged homoerotic glances between the king, his painter, and a model strung up as Christ, pierced through with prop arrows and fake blood. Art imitates life imitates art; The artifice of monarchy was not enough to prop up Richard.

If the series is emphasizing Shakespeare’s thesis that the crown is conditioned by and comments on he that wear it, how should we understand this interpretation of Richard II? Despite stellar performances from some of best Shakespeareans working today—Rory Kinnear, especially, fresh from his gripping portrayal of Iago in the National’s recent Othello—Whishaw steals the show as a king unable to command his own script. Richard performs many kinds of kingly types, but is unable to craft a version of kingship for himself. His abstracted personating is riven from the realities of governance, the needs of those “wavering commons.” This suggests that performing power is not the same as having power—an argument Paul Yachnin would be fond of. As a hold-over from the conditions of the play’s initial performance, such a claim would have helped protect the theatre from naysayers; by only performing the trappings of power, the theatre doesn’t necessarily have power. And yet a 1601 performance played a role in the downfall of one of Elizabeth I’s real favorites, Robert Devereaux, the 2nd Earl of Essex, in his failed attempt to instigate a rebellion.

So the threat, perhaps, is not in the ways kings choose to fill the crown of England, but rather in the very mutability of that prop. The English believed that the species of kingship at the helm also manifested in the state of the realm. The simile associating governance with gardening threads its way throughout the Henriad. Here, the illustrious David Bradely plays Gardener to Richard’s topiary. Not given a proper name, the Gardener stands in as an emblem for common perceptions, the voice of the things tacitly understood by the people. To the depressed and naive queen he explains the situation best:

In your lord’s scale is nothing but himself,
And some few vanities that make him light;
But in the balance of great Bolingbroke,
Besides himself, are all the English peers,
And with that odds he weighs King Richard down.

In the eye of the people, there is nothing miraculous nor mysterious left in the person of the king. The multitude has returned to a rubric of who has the resources to govern best rather than a religious right. Richard has the performance of kingship on his side, but Bolingbroke has his virtue and the support of the peers to back him. In Richard, the tale of the player-king ends, while Kinnear establishes the reign of Henry IV, to be measured in his age under the auspices of Jeremy Irons.