Whether it was the overly-large glass of moscato or the fact that I have seen this play more times than I can remember, the Department of Theatre’s staging of William Shakespeare’s Much Ado About Nothing was nothing short of delightful. As Kathleen Conlin’s going-away piece, it was a playful and coherent production with a number of factors going for it. The play is currently experiencing a vogue moment as a staple of most major theatre festivals around the country. The recent Joss Whedon interpretation, along with the perreniality of Branagh’s film version featuring Emma Thompson, have provided audiences with many strong versions to compare and a relatively refined vocabulary for reading this particular play. This is not to mention the international run-away success of the Q Brothers’ rap-adaptations of Shakepseare, of which Funk It Up About Nothin’ was their first, and a compelling modern-language retelling as part of the Shakespeare ReTold BBC mini-series. Where I have argued previously that Hamlet as a text needs a respite from the silver screen, despite all these versions I don’t think I can say the same for As You Like It.

While Thompson made it easy to forget the presence of Keanu Reeves—who might “infect to the north star” any good play—in this version it is the Benedict (Thom Miller) who steals the show. As someone who studies collective performative phenomena like repertories and ensembles, it is often my contention (on this blog at least) that the key to a great production is a well-balanced cohort. In this case I would make an exception. I’ve been waiting for the department to give Miller a part to lead with, having thoroughly enjoyed his work in 44 Plays for 44 Presidents, The Normal Heart, and his innovative take on Caliban in The Tempest. In Benedict he finally has smart words that challeges his range of embodiments. You get the sense that he is itching to speak directly to each individual spectator. Frequently he climbed up onto the very edge and lip of the stage, leaning out at far as that space would let him to make sure you were getting every detail. With this kindof physical range I was able to feel his emtotional extremes. A technique notably deployed in The Normal Heart, Miller is able to drop from the giddy to the serious in a breath to make lines like “If I do not love her, I am a fool” ring with an extential seriousness it does not immediately suggest on the page. 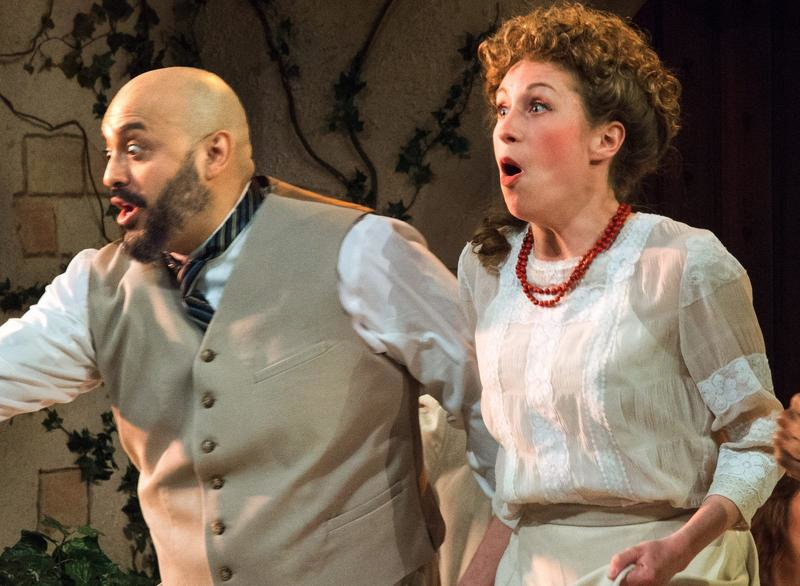 This is not to say Dina Monk’s Beatrice was weak-sauce by any means. If anything, it is the bitter bite the part of Beatrice is capable of, her ability to “laugh me out of myself, press me to death with wit” that can so easily overwhelm a Benedict. Miller’s physicality paired with his height could have overwhelmed most, but Monk keeps up, determined not to be lobbed with a review as “duller than a great thaw.” She has height and maturity that at times un-sexes a Beatrice, but this portrayl makes the knowing wit of middle-age sexy—a vision of love that I think resonates with many.

Monk is able to hold onto her femininity in part because of Neal Moeller’s Duke Claudio. A strange construction, I know, but let me explain. An aspect of this play I feel often goes underdeveloped in staging is the Duke’s desire for companionship—first playfully suggested between he and Hero, and then in a drunken off-hand proposal to Beatrice. The later is more important here, as Beatrice plays with honest embarrasment and surprised flattery. She has to turn him down, stutteringly, but for a moment our loyalties are torn: wouldn’t we want a ruler to have a smart wife, who we know is the neck that props up the royal crown? The suitability of the pairing is often downplayed in order to avoid mixing up the audiences’ feelings. But I like the mix-up, I like having my desire for the pairing of Beatrice and Benedict challenged. 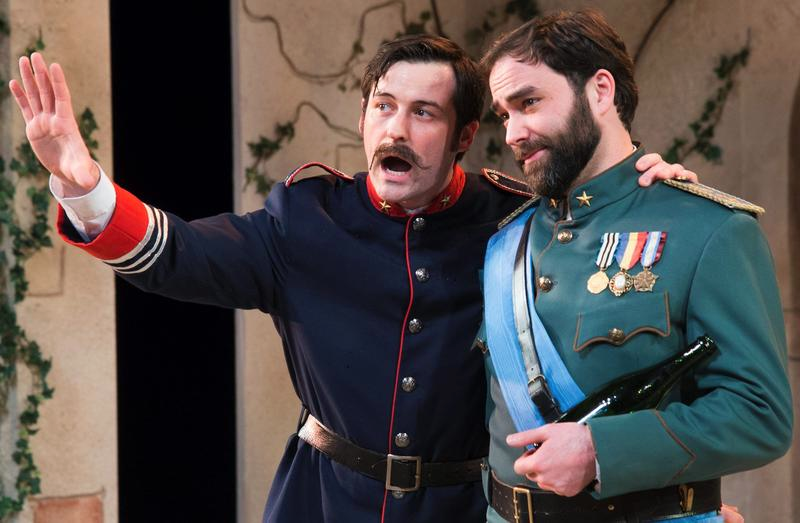 There is a further unsettling ambiguity to the tradition of down-playing the suitability of Duke Claudio to either Hero or Beatrice, and it has to do with miscegenation. In the Branagh film, Denzel Washington as the only Black actor in the production makes the suggestion of mixed-race coupling that is blithely eschewed. More generally, were the Duke to marry the mildly aristocratic Hero or Beatrice, the play would give us a compelling vision of intrastatus mixing. In its version, Moeller’s Duke is drunk enough to speak his mind (if hyperbolically), saying too much of what he does mean, rather than Whedon’s take on drunkeness as summoning up a capability to commit to what we do not mean.

At base, understanding the Duke’s marriagability comes down to how early moderns may have perceived of drunkeness and precisely what inhibitions were lowered. While this bit of original practices may as yet be unarticulated, the material staging of the production does some creative work with a proscenium (read: eww) stage. It’s a striking serendipity that as a young girl I saw several of Conlin’s productions at the Utah Shakespeare Festival, during long summers visiting my grandparents in Las Vegas. Once I had read everything in their house and the strip had lost its novelty, we would take to hiking around Mount Charleston, Bryce Canyon, and Zion National Park. My grandmother thinks there is no better thing than culture in a mountain cabin, so the open-air Shakespeare plays in the heart of ancient Western landscapes were a kind of heaven on Earth. To her final piece before retirement, Conlin seems to have brought that earthy capaciousness indoors. 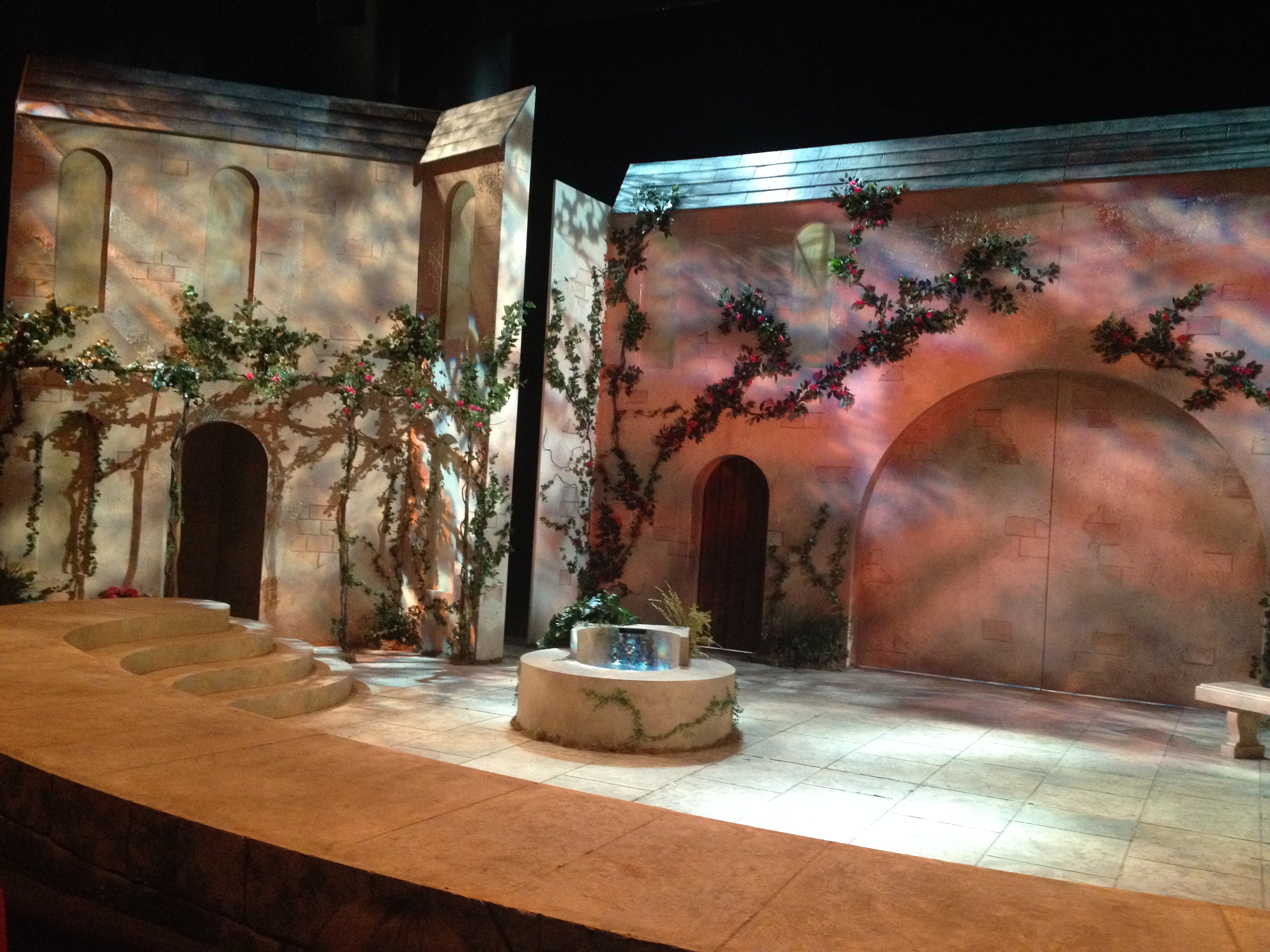 The flexible design of viney marbling and working fountains cultivates an Italianate twist on the rocky landscapes of the Great West. With four doors, six entranceways, and a (sparingly-used) discovery space, the production placed a premium on continuous and multiplying action. What is most creative was the architecture countermand to the proscenium arch. Prosceniums, an operatic holdover, cuts off the audience from the performance, limiting and flattening the range of views a thrust offers to a single perspective—not unlike a camera lens. No Shakespeare plays was designed with such a thing in mind: even the indoor theatres of Blackfriars and Whitefriars used thrusts or were nearly theatre-in-the-round. Here a mild thrust was built out and then steps built up to a kind of dias that matched and ringed the lip of the stage. Actors were blocked up and onto that dias frquently, right up to the edge and over the tops of the audience. The best way I can describe it is as an “antithrust,” working to match and enjamb the proscenium arch above to rebuild some of the lost perspective vertically rather than horizontally.

In light of the recent tradition, casting, and staging choices, I have begun to think of this play as an interrogation into the pleasure of disires. The play is a glutton in the excesses it takes with jealousy, love, with, humor, and affectation, playing each up to the extent of a pleasurable misprision by way of their extremes. But with the rejection and disguised death of Hero, we as audiences are rightly chastised in the emotional excesses we take from the play—a gout to our aural feasting. That Benedict is willing to kill his bosom friend for his love of Beatrice stops the joy cold. It seems a reasonable censure, however, bringing the skirmish context that intigated the action back to the fore. This is why I prefer the darker ending of Hero refusing to take back her husband, rather than the reconciliatory comedic ending of multiple marriages the Krannert production selects—as do most mainstream productions. With reconciliation the trial of Hero’s reputation seems a passing fancy of little consequence, rather than the life altering significance the play initially posits. Perhaps this is why Othello has the power that it does: a marriage bed laden with two dead couples is the product of Cassio’s lost reputation. When only half the couples marry off, and the more ill-fit couple at that, this “misprision” echoes more of life’s realities rather than ensuring that every man has his mate. But as a last act, I suppose it would be unfair to deny a creator a fairwell whimsy of neat fits and happily ever afters.