This fall the Court Theatre, the professional theatre at the University of Chicago, is mounting a production of The Comedy of Errors by William Shakespeare, helmed by avant-garde director Sean Graney. Because he is noted for dynamic and unconventional staging, I was interested to see how this play had any film history. Low and behold, outside the Kenneth Branagh oeuvre I found reference to a Jim Abrahams comedy featuring Lily Tomlin and Bette Midler based on Shakespeare’s play, called Big Business (1988). The film’s vested interest seems to be not in the relationships or struggle for identity at the center of Shakespeare’s play, but uses the trope of multiple twins and body switches in order to juxtapose the glorified and pastoralized fictional town of Jupiter Hollow to the gratuitous evil of New York City—and yet the entire film takes place in the Plaza Hotel at the heart of the “evil” city.

Lily Tomlin, playing both twins Rose Ratliff and Rose Shelton, epitomizes love of the picket-fence country mystique. In fact, her bumpkin Beau Roone Dimmick (Fred Ward) is allowed to monologue to the homosexual corporate executives on the beauty and values of Jupiter Hollow. Encased by the concrete jungle, Roone’s audience “ooh” and “aww” while he asks for his sushi to be thrown back in the fryer. Throughout the film the city is demonized all the while the characters enjoy the fruits of New York luxury: the anti-urban rhetoric becomes somewhat deafening. In fact, Lily Tomlin’s characters are rarely seen without some luxurious food item in hand, and she is often mocked for “making love to the desert cart.”

The film goes to great lengths to cultivate stereotypical New York snobbery in contrast to the pastoral dialogue. This is epitomized in a scene in which the bumpkin half of Bette Midler’s character, Sadie Ratliff (mirrored by Moramax company president and socialite Sadie Shelton), tries to hail a cab. Countless times does she succeed, but only to have it nabbed from her by other New Yorkers. Finally she hits a man over the head with her purse in order to keep her cab; the camera shows the man smiling in approval at her big-city gumption as the cab streaks off with Sadie finally inside. While the film doesn’t seem to end with a vote explicitly for any particular lifestyle, both sets of sister get the lifestyle they desire. The merits of the city are never explicitly touted, and the film feels ideologically lopsided in part because of this. 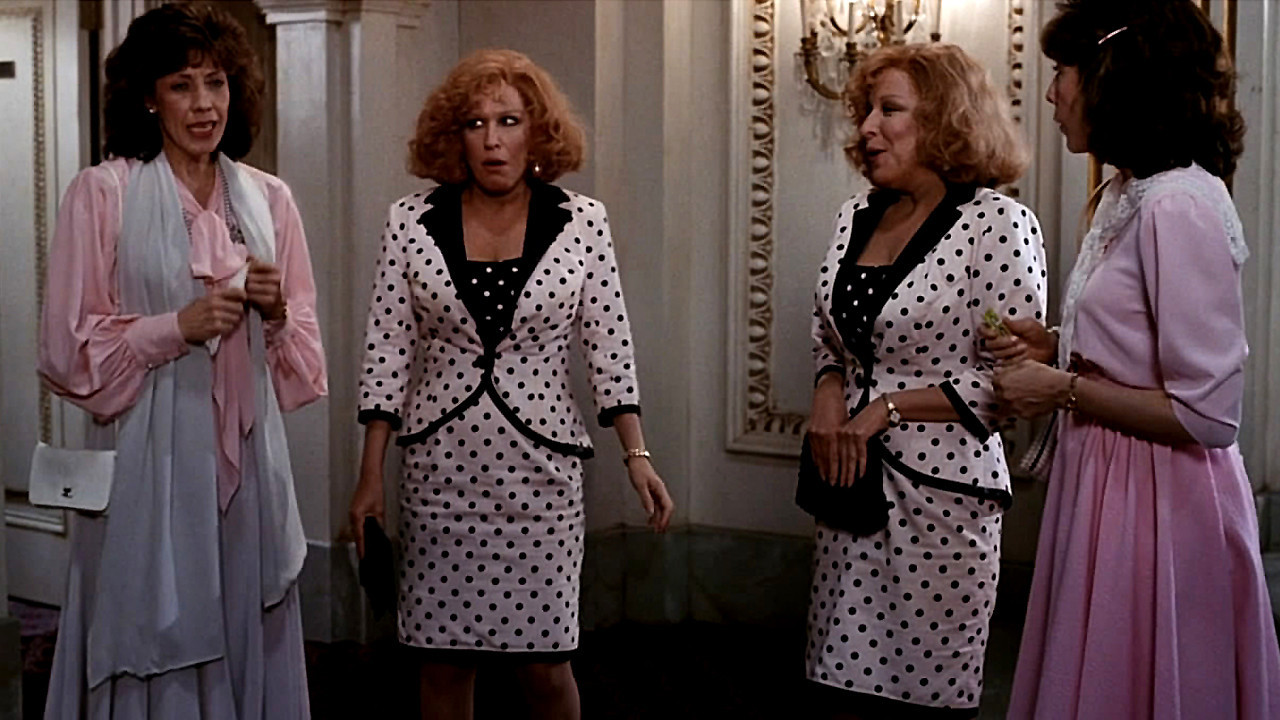 In general, this film feels more like a collision of A Midsummer Night’s Dream and Errors in the way it deals with relationships. All four sisters eventually trade up their complicated romantic relationships for each other’s—and it is no surprise that they are all heteronormative. Riffing on play that purposefully puns on narrative structure and the inherent plot holes that result, the most confusing and unsettling hole left by the film is the exchange of these relationships in the last scene of the film. Both of Bette Midler’s characters are big-city women and one gets an Italian mogul and the other the formers divorcée. Rose Shelton (the reformed big-city girl but rustic at heart) gets her twin Rose Ratliff’s boyfriend, bumpkin Roone, in exchange for the formers doctor beau. Note: both men attempt to propose marriage to the wrong Rose in the course of the film.

This swapping of rejected or would-be spouses is one of the many unsettling elements of the film. If the doctor (Michael Gross) was willing to propose marriage to one Rose, is it so easy to believe he would be so quick to let her go for a more parochial look-alike? Are we to assume there would be nothing odd about one Sadie adopting the other Sadie’s ex-husband (Barry Primus) on the only premise that she is a much better mother than her twin? These relationships seem a little too complicated, with a little too much emotional baggage, to just be counted as another body switch.

There are two typical Shakespearean plot elements that, interestingly enough, have nothing to do with the source texts. First, there are no parents present whatsoever in the majority of the film, although references are made to marriage and wanting children. CEO Sadie has a spoiled son named Sly, but she shows little interest in him. In Shakespeare’s version, parents frame the narrative of the play, and ends with a reunion between spouses and one set of children. (The Dromio slave twins never meet there parents and no one seems concerned about it either.) Secondly, is the inclusion of the well-meaning hotel desk clerk who has a little fling with bumpkin Sadie is left un-partnered by the end of the film, and serves as another site for irresolution. Inspired to take action and pursue Sadie, he does so only to get punched. At the sight of triplets, the same desk clerk passes out, which may have been an attempt by the director to provide some resolution for a character with no doppelganger. His character still sticks out like a sore thumb and would have been best treated like a Malvolio-type from Twelfth Night, which would have given the film a dark comedic edge.

These last scenes, driven home hard by a remark made by the token New York homeless man, suggest we all have a double or other half out there. Is that the big message we are supposed to get out of the film? Is that the point? It rings a bit empty because all of these unsettling and irreconcilable elements have no payoff—like an episode of The Office gone horribly awry. The film opened to lukewarm reviews although it did go on to earn more than $40 million at the domestic box office. Despite the efforts of Tomlin and Midler, the film fails to resonate except for reinforcing especially well worn and distasteful stereotypes of the late 1980s.

Beyond the entertainment value, Big Business fits snuggly in the canon of twentieth century adaptations of Errors that seem to implicitly argue that the play, as it stands, is a simple and unimaginative farce which only works when so many additional periodic trappings. This is an artistically disingenuous move, most evident in the pivotal moment in the film where Sadie and Rose meet their other halves in the hotel bathroom that not even expert comic actresses or improved special effects could save. The problem in this film is not casting or script—which in truth has a few sparkling quips delivered by Bette Midler—but really plot. Where Shakespeare’s play seems to poke fun at the problematics of regimented and formulaic writing, Big Business suffers from those same problems in the perennial but often stagnant Romantic Comedy genre.

While markedly more enjoyable and more thoroughly aware of its source material and led by noted director Barbara Gaines, the Chicago Shakespeare Theatre’s recent staging of Errors also felt it was necessary to add an additional metatheatrical plotline. Set on “the fictional English movie set of Shepperton Studios in the midst of the London blitz to film” Shakespeare’s play, at least this production showed a concern for lost and found identities and kept some crucial elements that make the farce of exponential twins work.

Graney has a penchant for chopping and rearranging, often criticized for being more in love with his dramatic shtick than the play as a holistic performative experience. However, he is a strong reader of early modern drama, if his production of Edward II is any indication, and his dramatic aesthetic sells tickets. The Court is one of the most innovative companies in Chicago right now; their production of Titus Andronicus changed the way I thought about performance and the theatre experience. It will be interesting to see if Graney will follow the trend of problematically adding to Errors plot as a justification to make valuable, or if he will offer an even more paired-down and stylized adaptation working with the complexities this play already offers—something far riskier and potentially far more innovative than any adaptation could offer.