Absence, hear thou my protestation
Against thy strength,
Distance and length:
Do what thou canst for alteration,
For hearts of truest mettle
Absence doth join and Time doth settle.
– John Donne

This week’s episode was one of parts and wholes. As the individual tenants and their rents provide the MacKenzie with resources and power to protect and provide, so are our leads increasingly defined by their constitutive parts. Claire (Caitriona Balfe) is the classic example of a synecdoche: a figure of speech in which a term for a part of something refers to the whole of something, or vice versa, such as referring to workers as hired hands. While preconceived notions are construed about Claire through her speech, her English accent, as a Sassenach, her “strong hands,” inquired after over and over again set those presuppositions to rights. In this episode, they are called on to help townswomen set a dark blue dye to a piece of wool by working in warm urine. Once she gets passed her 20th-century conditioned disgust, her isolation, a theme of the episode, is abated by the communion of women.

Similarly, the story of Jamie’s (Sam Heughan) whipping has turned out to be much more than an intimate revelation shared between friends. On the road, Dougal (Graham McTavish) is not merely collecting rents, but raising money for a Jacobite rebellion—a rebellion Claire is well aware they will never win. His scars are trotted out by Dougal to enact some complex semiotics of injury that I think Elaine Scarry, in her book The Body in Pain: The Making and Unmaking of the World (New York: Oxford University Press, 1985) explains best. Dougal’s tactic is powerful on two levels. First, when the clansmen see and touch Jamie’s hurt body, it is “juxtaposed to the disembodied idea,” that of Scottish independence, “and having sensorially experienced the reality of the first, believes he or she has experience the reality of the second” (125). Believing that they are a party to that pain, they are easily conscripted to revenge it. Second, “the hurt body’s instability of reference,” as in whether it memorializes a past winner or looser and to what extent it portends injury to come, is simply “unpleasant to contemplate—particularly since it denies the population’s ability to ensure what finally will be confined by its own violent and physically costly display of will” (Scarry 120). His scars, the history of his nation’s brutalization at the hands of the English writ into his very skin, is a source of both engagement and horror. While Claire’s hands help to undo her partitioned identity as an outlander, Jamie’s back disappears his subjectivity into his society altogether.

This partitioning occurs in less material, less overt ways as well. There is an interesting politics to the use of Gaelic in the film, far more expansively so than in the novels. Gaelic both includes and excludes. Claire, “even amongst the vast and beautiful landscape” already feels “trapped,” wondering is she will “have to reconcile [her]self to living a life among strangers two hundred years in the past.” Dialects even more subtly register loyalties and expectations. The disguised redcoat who attempts to save Claire from a brash Dougal ameliorates her alienation and foreignness for a moment with the respite of a shared speech pattern (one that proves a very effective cliff-hanger and smart deviation from the novel at the end of this episode).

More importantly, the in/exclusive functions of Gaelic in the show demonstrate the sophisticated cultural strategies of verbal policing and social censure through sexual jokes and sarcasm. The only discernible police force, the Watch, is clearly corrupt, so without an institutionalized troupe for safety and at the whims of a dispersed and unforgiving landscape, the depiction of Scottish culture here is one of intense verbal play and censure, making absolutely clear rather constantly what is accepted behavior as inscribed by the group, and not. But verbal harassment of women has a long history (and a recent one at that), namely as a strategy to both objectify women in public spaces and assert dominance over them and their space by men. While the several half-told jokes by the MacKenzie clan starting “So there I was in bed…” are bothersome to Claire, the same in Gaelic by men at an inn unseats the MacKenzies, causing a riot and destroying the inn. The guys justify the fight to Claire: “You are the guest of the Mackenzie. We can insult ya, but God help any other man that does.”

We can see that the synecdochal strategies used by the MacKenzie clansmen attempt to justify the objectification of Claire and Jamie, slowly removing a sense of individual subjectivity through communal policing and the political needs of the group. Thus, while we cheer for Claire when she turns the sarcasm and censure back on them, that she is accepted for the joke, her own assertion of dominance and objectifying her captors, upon reflection is perhaps the most nefarious moment. Has she been brainwashed? Come to be that which she abhors? Or is the pitch more on of survival than acquiescence? We’ll have to see. Claire understands that she is living in a small moment, just before the second of four Jacobite rebellions in which she is enmeshed and will be the end of the Highland way of life. In a few years the clans will be slaughtered at Culloden (which they pass in the episode), tartans and Gaelic will be banned, clan lands pillaged to starvation. Despite her attempts to sew discord and assuage them otherwise, she is scolded: “It doesn’t matter where you come from, you’re here…You’re not to judge things you don’t understand. Stay out of it Claire.” Jamie may be right here, while they pass crucified Scots on the highway (another variation from the novel) that imply the life of terror the English inflict in the name of a unified Britain.

However, Claire’s value seems to be precisely in her ability to diagnose things they don’t understand, at least in the body itself. Why not in the larger scheme of things as well? When she tries to intimate the futility of the war, Ned Gowan replies, “history be damned.” A passing statement just before the brawl, it is no less an interesting proposition, for this is a tale of time-travel after all. It is the first time the show suggests that Claire may be there to change history. At no other point is there even the mildest suggestion that the singing stones have plans for her, that there is some kind of intent behind her displacement, and we know our own history books. But, considering the uncanny exigency of the theme here, Scottish independence, perhaps Claire’s xenophobic partitioning, the history written in scars on Jamie’s back, are suggesting to us of something more immediately political than the initial romance billing of the series lead us to believe. In its reading as in its viewing, we the audience are the outlanders, the sassenachs, after all. 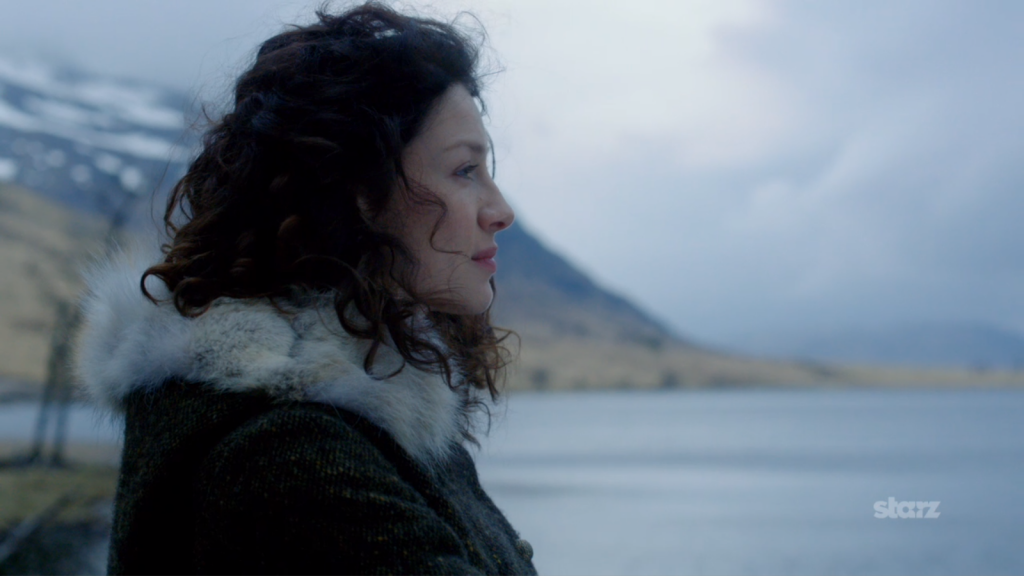