A decade ago, one would have argued that the Shakespeare media marketplace lay in the feature film. And you might have been right. As Simon Crowl has argued time and again, Kenneth Branagh was the hope of the industry. Born a street vagabond in Belfast, bred to be a carpenter, Crowl argues that his “genius as a film director is bound up with his powers of synthesis,” particularly in combining his “native Irish bravado with his adopted English tradition.” There have been an increasing number of non-tween Shakespeare’s other than Branagh’s in recent years: Taymor’s The Tempest and Whedon’s Much Ado About Nothing. Today, however, the real bulk of the work (outside brick-and-mortar playhouses) is being done on the silver screen. The Shakespeare cinema industry seems to have taken up residence in television, namely the mini-series. 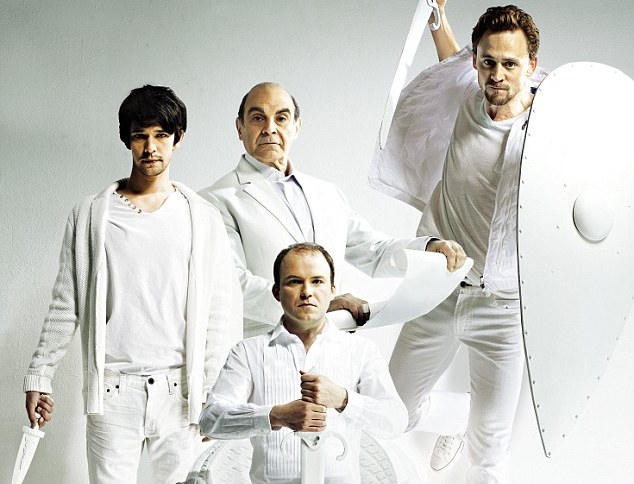 The most important of these recent incarnations is The Tudors. While Wyatt and Holbein were frequent guests, the show never got far enough into Elizabeth’s reign to introduce playwrights. (There are some excellent moments dramatizing medieval interludes and other kinds of court performances, however.) Demonstrating that there was a market for the Renaissance on television, perhaps not the length of an entire season—although the CW’s Reign is putting this to the test—there was certainly room for the miniseries. There had been precedents: The Six Wives of Henry VIII (1970), The Shadow of the Tower (1971), and Elizabeth R (1972). (Who could forget the emerald green velvet lining of the box set to Elizabeth R?) Many of these were produced as collaborative projects between BBC and PBS, with significant support from cultural institutions. They were one-off projects in the service of their merits rather than the revenue they might produce. The ’60s and ’70s was an especially sparse time for live-action material on PBS. The bulk of their properties were made up of children’s programming like Sesame Street, Mr. Rodger’s Neighborhood, Electric Company, and The Wonderful World of Disney—much of which extremely influential in the development of the Kid’s market. In an age where the live-action drama reigns supreme whether it be basic cable, online streaming content providers, or the premium channels, the period/costume drama appeal is growing, and Shakespeare with it.

In the last year, The Hollow Crown and The White Queen vied for attention across these markets by using the miniseries format. As White Queen aired this past summer on STARz, I blogged extensively on the series’ narrative development. It recounts the War of the Roses by way of Phillipa Gregory’s feminist bent, tracing machinations sovereign and common through the eyes of Elizabeth Rivers, Edward IV’s queen. White Queen was rather first-wave in its gender investments, so it was interesting to see Reign on the air a month later with a refreshing third-wave posture in its version of the girlhood of Mary Queen of Scots. At the same time did PBS run The Hollow Crown as a four-part series through the end of September and into October. Featuring two generations of England’s best classical talent, the series professes itself as a teleplay, not an adaptation, of Shakespeare’s Henriad. Following three kings—Richard II (Ben Whishaw), Henry IV (Jeremy Irons—who’s son, Max Irons played the role of Edward IV in White Queen), and Henry V (Tom Hiddleston)—the series uses the conceit of the ‘hollow crown’ to organize the ideological content of these performances.

The title conceit comes from a quotation in Richard II. Realizing he has lost England and any sway he might have had over the commons or peers of the realm, Richard looks out across a beach to his few remaining retainers and commands:

For God’s sake, let us sit upon the ground
And tell sad stories of the death of kings;
How some have been deposed; some slain in war,
Some haunted by the ghosts they have deposed;
Some poison’d by their wives: some sleeping kill’d;
All murder’d: for within the hollow crown
That rounds the mortal temples of a king
Keeps Death his court and there the antic sits,
Scoffing his state and grinning at his pomp,
Allowing him a breath, a little scene,
To monarchize, be fear’d and kill with looks,
Infusing him with self and vain conceit,
As if this flesh which walls about our life,
Were brass impregnable, and humour’d thus
Comes at the last and with a little pin.

Richard lists here all the kinds of monarchal stories one might tell, of poisoning, war, and usurpation, arguing the life of a king always ends the same way: with murder, by the very crown they wear. Insignificant without a wearer, Richard is coming to the realization that it is not the hat that makes the man. To wear the crown is both to tempt death and forget one’s own mortality. It is the crucial prop with which to perform king, to personate kingship. The series foregrounds this question, what makes a king, by providing us three different answers in Richard, his usurper Henry and Jr., in the trappings they adopt in order to, as Shakespeare says, “monarchize.”

In the next couple weeks i’ll be reviewing the series in three parts based on the American DVD release by PBS under their Great Performances series. In part, it will be a nice distraction while we wait out their conclusion to the fourth season of Downton Abbey. It is also a compelling next iteration in the Renaissance miniseries fad crossing the airways, a glut of which was available this past fall. A trailer to whet your whistle: