[Blackout. A pretentious, heavy-metal version of ‘Greensleeves’ crashes through the sound system. At its conclusion, lights come up to reveal JESS, in Shakespearean attire and high-top sneakers. JESS consults the book, realizes it’s upside down, turns it over, flips a page, and reads.] 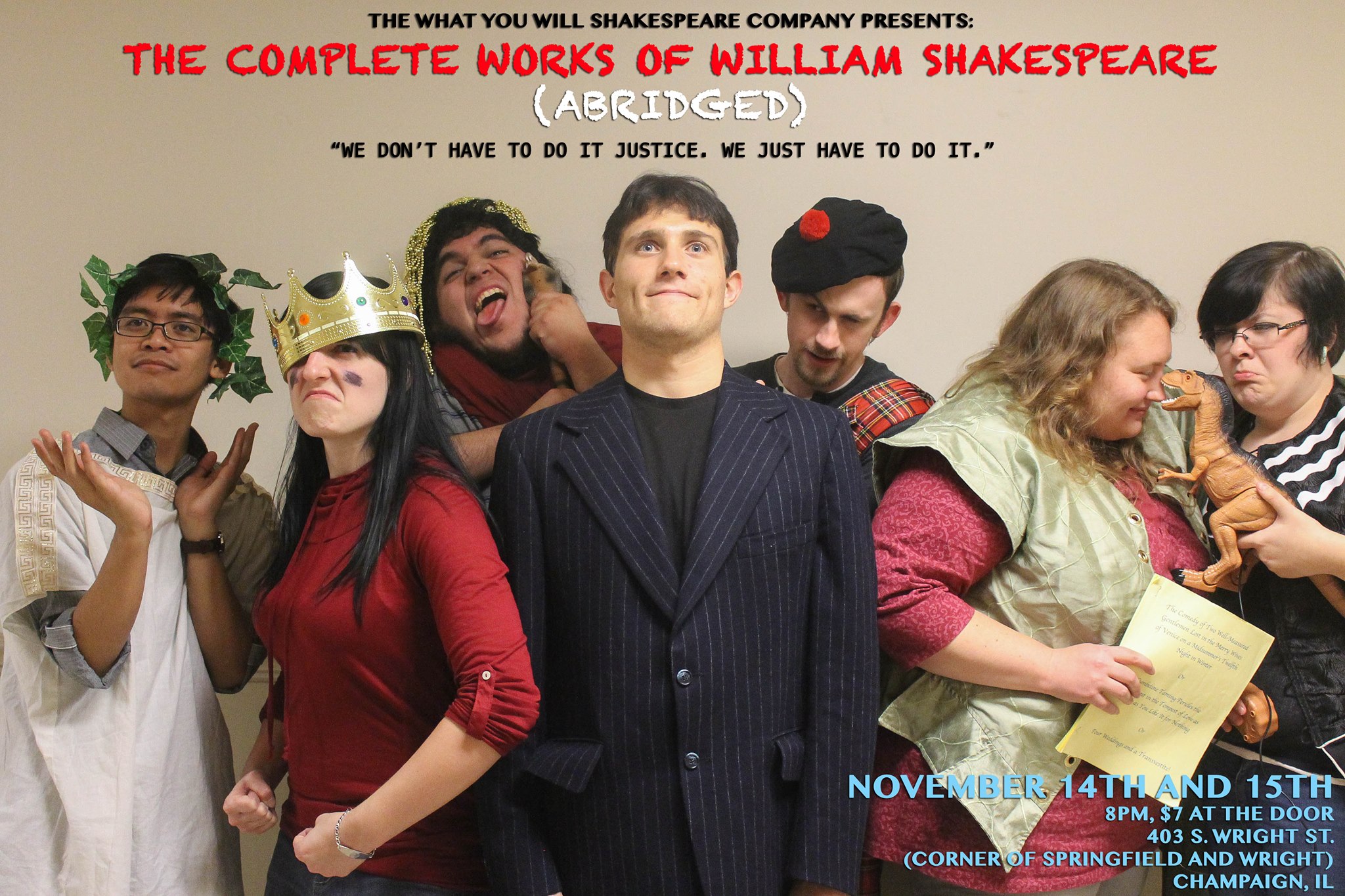 Before the weekend is up I wanted to say a few works about the What You Will (WYW) Shakespeare Company’s production of The Complete Works of William Shakespeare (Abridged), now playing at the University Place Christian Church on the corner of Wright and Springfield in Urbana, Illinois. Part of the fun of seeing these entirely student-run productions is the creativity they bring to the stagings, and especially how that creativity gets meted out interpreting these plays on a very limited budget. Circumscribed by a collegiate audience and atmosphere, one of my favorite offerings has been their version of As You Like It, which openly embraced campus life to give the play exigency. But the now ubiquitous Complete Works (Abridged) is another matter altogether. With a script that already plays fast and loose with the status of Shakespeare in popular culture, already has the tongue-in-cheek built in, I wondered how the troupe would find ways to bring their style to bear.

While the group is usually very smart about capitalizing cleverly on costume choices and doubling, making the most of careful selection, here they stuck to the script. As suggested by the quoted stage directions above, the group kept things simple and plastic: high-tops, hoodies, and quasi-Ren faire blouses and vests. In this way the students’ abilities as actors were underscored, not allowed to hide behind costume and mise-en-scene. Most notable were veterans Matthew James Marquez and Megan Scharlau. Marquez capitalized on his height and expressive features to toy with expectations of cross-dressing in the period, as well as the levels of disgust different cultures are willing to tolerate in the name of humor. (This is to say much vomiting was had.) Sharlau, on the other hand, has a knack for comedic timing, which productively poked at the motivational holes behind leading tragic characters like Hamlet. (She seemed to revel most in the Seussian Green Eggs and Ham references.) Also notable were Kevin Gomez as an expression of our too-willing dependence on the Internet, and Orion Lovell making sure the fourth wall never remained up for long.

The other thing about the text of this particular play that makes it well-suited for students are the moments in it aimed at audience participation. The final Ophelia-psychology scene is perhaps most famous (see what I mean below) for inculcating the audience, but there are many other moments in the play that provide the actors similar opportunities. At the Friday opening performance there were many gestures to this, but the performers primarily targeted friends or members of the troupe, including using at least one plant for the “Get Thee To A Nunnery” scene. While of course putting on a play is challenge enough, with so many veterans in the cast I hoped the group would try to really tackle getting strangers in on their game. It is my hope that WYW’s spring productions take up this particular challenge as they re-envision these plays. Otherwise, the performance was all fun, with humour well delivered all the while tackling real questions of canon and cultural prestige in the process.