Ravij Joseph’s Bengal Tiger at the Baghdad Zoo was a bit of a gamble for producers in many respects. They bet on a youthful but Pulitzer-caliber playwright and a greenish cast led by an old pro taking up an emotionally difficult conceit all in a visually dynamic space. The musings of an ornery tiger in a Mideast zoo may seem like games of farce at first, but after the opening tableaux you are confronted with the reality of war in the age of the iPod. This full-length drama is definitely of a piece with Joseph’s other two shorter works, Gruesome Playground Injuries and Animals Out Of Paper, recently collected in print. They are intensely visual even on the page: the first is charted by actual first charted by wounds and self-wounding, while the second obsesses over the mechanics of large origami. Similarly, in Bengal Tiger the vehicle for social comment is topiary in the desert.

While the essential conceit of Bengal Tiger seems simple enough–an existential ghost of a zoo tiger wanders war-torn streets–it belies a visual complexity that reportedly cost its producers $3 million. The Richard Rogers Theatre is a classic Broadway performance space: ornate, intimate, and tightly reigned under that proscenium archway. Yet, Derek McLane’s piecemeal layering of large set elements in contrast to the crouched smallness of Williams and the American soldiers provides a sense of space to breathe. You can almost feel the frayed bits of street being pulled apart by the tension at hand. Most striking are the large, burnt topiary animals that provide a sense of otherworldliness not only by virtue of being a plant purposely placed center stage, but also by the absurdity of being flora carved into fauna. At times the Marine interpreter’s office co-exists with the topiary pieces in an effect that conveys a pleasurable juxtaposition of work-a-day grit and decaying nature.

This heady juxtaposition carries into the casting of Moises Kaufman’s second direction Bengal Tiger as well. It is no secret that the run is inexorably linked to it’s tiger, Robin Williams. (The play opened in March and will close in July.) While Williams and his impressive beard were allowed to present at last night’s Tony Awards, many were surprised that this role did not manufacture a nomination for the comedic actor. Winner of both Oscars and Emmys, Williams may have been indeed looking for that triple crown. The role is perfect for him: the tenor and rhythm of the tiger’s confessional-cum-cynical monologues have bite, bitterness, and farce. His delivery is effortless, and you could be forgiven for thinking some of it may have been his own improvisations rather than the script. But perhaps the producers banked too hard on Williams’ brand (his name is the largest thing on the show poster), and having seen him live twice on comedy tours, he seemed to be falling on old tricks of manic disdain and ventriloquizing multiple personalities–an effect that sometimes feels fractured rather than a piece with a coherent performance. Perhaps the role is too perfect? Perhaps the weight of fame hindered rather than helped this time?

Whatever the case maybe for Williams, his performance was everything I hoped for and was put in relief by the heartbreak and hopelessness of Musa (Arian Moayed). A newcomer to the Broadway, Moayed plays the Iraqi interpreter working for the American Marines but who is really an artist and responsible for the topiary. While the play gives a lot of voice to the two American soldiers struggling with PTSD and disability, the crux of the work lies in the relationship between tyranny and civilization. Musa can only be a gardener in a desert (an oxymoron in itself) when employed by the sons of Saddam Hussein, who are the only people with the resources to bring enough water to foster topiary. It is through Musa that we are brought to consider the nature of tyranny not only as we perceive it in the Middle East, but also our own fears of ‘big government’ at home. (Moayed studied at Indian University and was part of a cohort of Midwesterners that were recognized this year at the Tony’s; Anna D. Shapiro from Chicago’s Steppenwolf Theatre also received a nomination, and Chicago’s Lookingglass Theatre was awarded the for Best Regional Theatre). Moayed, I feel, deserved his Tony nomination, even if no one was surprised that Mark Rylance ran away with it.

It is this voicing of extremes in design and performance that provides Bengal Tiger with a sense of continuity amidst that sometimes rambling epistemology. In terms of the play’s social justice topicality, the theatre has been experimenting for some time with how we should feel about HIV/AIDS (read: Rent, Angels in America, The Normal Heart) but not about the modern war effort. One might argue, however, that the recent Oscar wins by The Hurt Locker suggest we are moving in that direction. This year, both the Drama Desk and Tony Awards seemed to hold some marked disdain for “thinking” plays in the service of more comfortable topics; Jerusalem, Arcadia, and Bengal Tiger were all vastly under-represented. First world problems have taken the spotlight in recent years in terms of new drama with few exceptions. In contrast, Bengal Tiger mulls over that very uncomfortable place where the tragedy of the first and third worlds collide. It is this discomfort that, to me at the least, often signals a kind of depth and emotional precision–honing in on tender ground that requires exploring (not unlike Rent) and the voters were not quite ready to admit. 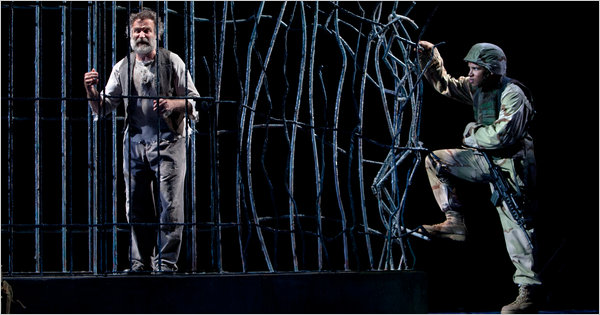 One Reply to “This “Bengal Tiger” deserves more attention”